The Wolf Among Us: Smoke and Mirrors Review 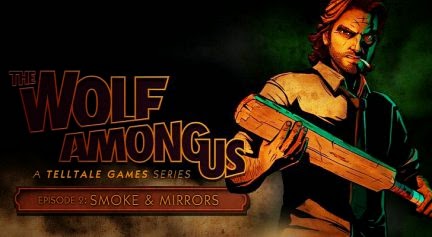 The second episode of The Wolf Among Us picks up right after the surprise ending of the first episode, and manages to continue the pace, delivering all the content that made the series premiere so good.

The story starts off with Bigby having to deal with mundies, which is the term fables use for the mundane, or non-fable folk.  Their meeting is quick, but it was interesting to see how Bigby reacts to people who he isn't sworn to protect.  It would have been nice to have seen more of this, but the story soon continues the murder investigation that started in the premiere, and manages to throw in some twists of its own.

The returning characters are once again well written and performed, and the new characters are their equals in both categories.  Of special note is the character of Bluebeard, who is a shady type that sticks his nose in Bigby's business and seems to have an ulterior motive behind his actions.  He is voiced excellently by Dave Fennoy, who previously voiced Lee in The Walking Dead.  The rest of the characters are great as well, but Bluebeard is the standout this episode.

The music once again is top notch, filling the atmosphere of the game with its excellent soundtrack.  There are still no traditional adventure game puzzles of note, but the choice based gameplay is used well here, as is the choice of paths that was introduced in episode one, and is still a welcome addition here.

Faith started the season off with a bang, and Smoke and Mirrors continues the momentum. The plot is great and the mystery is expanding in interesting ways. The voice actors do a fantasic job here, the music is great, and the choice based gameplay continues to be utilized in a satisftying manner.  This series is continuing in the direction of being one of Telltale's best cinematic story games.

Posted by Jennifer McMurray at 10:32 PM