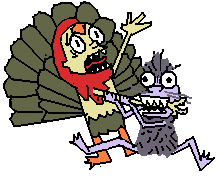 Happy Thanksgiving to everyone in the United States. Enjoy a Homestar Runner 20X6 Thanksgiving cartoon to celebrate the holiday!

If you're in the mood to start your Christmas shopping (and since tomorrow is the start of the holiday shopping season in the US, you should be), Telltale has set up a Gift store where you can purchase items as a gift for your friend or loved one. Even better, they are now offering two new bundles. Bundle one is a Sam and Max Gift Bundle featuring both seasons of the Sam & Max games (that's 11 episodes) on extras-filled DVDs, topped off with a copy of Surfin' the Highway. Bundle two is a Wii Game Gift Pack featuring the Wii versions of Sam & Max Season One and CSI: Hard Evidence. (Region alert: these are the North American versions and won't work in PAL Wii consoles.) They are offering gift wrapping for all purchases (excluding downloadable games of course). And, to sweeten the deal they're also offering free USPS shipping for people who're buying a downloadable game along with physical merchandise! This offer's only good through Wednesday 12/3 though, so don't wait too long. 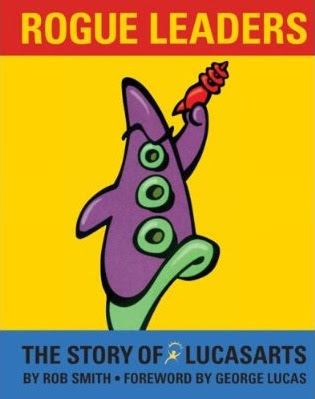 Oh, and I also feel the need to mention Rob Smith's new book Rogue Leaders: The Story of LucasArts. This book tells the story of LucasArts from it's early days as one of the upstart Lucasfilm computer divisions along side what would become Pixar, to the legacy-forgetting company that it has become today. It contains a lot of concept art on released games, and details a lot of games that were cancelled including Sam & Max Freelance Police. The cancellation of this game was the catalyst that led to the formation of Telltale Games, and eventually led to the creation of the episodic Sam & Max games that we all know and love. It's going to be released sometime in December, but if you live within driving distance of San Francisco and RSVP in time, you can get it early and for a 20% discount at the release party on December 4th.
Posted by Jennifer McMurray at 8:04 PM