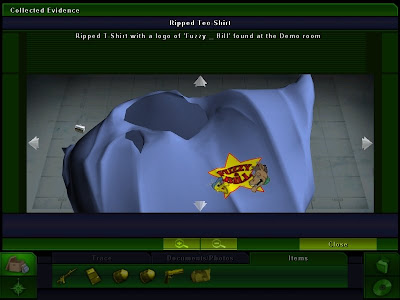 "Ripped T Shirt with a logo of Fuzzy & Bill"

Fuzzy & Bill are based on Sam & Max. They are characters that were part of a webcomic that became a video game that was moderately successful, but had a cult following. The game was going to get a sequel, but the sequel was cancelled in favor of publishing Gutwrench III, a game that will sell huge amounts of copies just due to brand recognition.

More CSI: 3 Dimensions of Murder Injokes:
Posted by Jennifer McMurray at 11:51 AM