Update: 1/2/09: Yeah, this post was an April Fool's joke. I'm sure no one fell for it, but I kept it subtle since I wanted it to be semi-believable. I was inspired by The International House of Mojo's Genesis version of Monkey Island 1 from last year. I'll see if I can come up with something a little more creative next year. :) 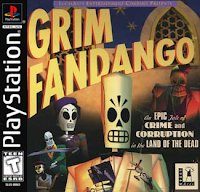 Grim Fandango seemed like a game that was made for consoles, yet for some reason it was only released for Windows. It turns out that it was developed for a console after all, the original PlayStation. Grim Fandango was released on the PC in 1998, at the end of the PlayStation's life cycle. The PlayStation 2 was right around the corner, so LucasArts dropped their plans for releasing the game to the PSOne.

But, now, Grim Fandango for the PlayStation appears to have hit the internet. Reportedly, it is in a fairly finished state, and it is completable to the end. I can't post a link to this here due to the fact that it's an unauthorized leak, but it shouldn't be too hard to find with a quick Google search.
Posted by Jennifer McMurray at 5:05 AM