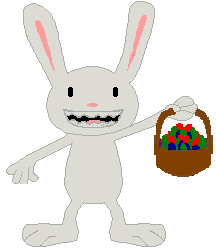 Happy Easter! Telltale has a weekend only deal going on for Sam & Max Season One! If you order the game from their website this weekend, you can buy the game for only $19!

They have a similar deal going on for Strong Bad's Cool Game for Attractive People. Nintendo raised the storage limit by allowing SD Cards to save and load games directly on the Wii, so now users can store as much as 2GB of data on a single SD card. As a direct result of Nintendo's raising of storage limits, sales of the Wii version of Strong Bad's Cool Game for Attractive People have doubled. As a celebration, Telltale is offering the PC version of SBCG4AP for only $19.99 if you buy the game through the game demo.
Posted by Jennifer McMurray at 11:04 PM