Lucidity, a LucasArts Puzzle Game, To Be Announced 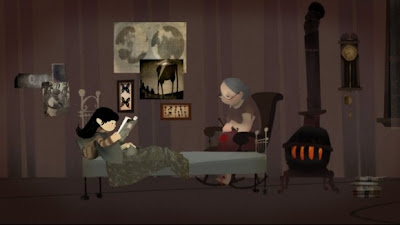 I wasn't sure whether to post this here or not, since I tend to only enjoy the adventure games by LucasArts. But Lucidity, a puzzle game for the Xbox Live Arcade that was revealed to Joystiq by an anonymous source in July, sounds like the game I'd really enjoy. Then, later in July, Joystiq released the first screenshot of the game. The art style in that single screenshot looks beautiful, so my interest was piqued even more.

Now, LucasArts has opened a new blog called the LucasArts Workshop. On that blog is a picture of people dressed up as Star Wars Jedi. On the right side is Sofi, the little girl who stars in Lucidity. She is holding a puzzle piece. There are four pictures in total, each with a puzzle piece. 1.jpg, 2.jpg, 3.jpg, and 4.jpg.

Thanks to fajerkaos in the Mixnmojo comments, the pieces have been combined to show art of Lucidity. 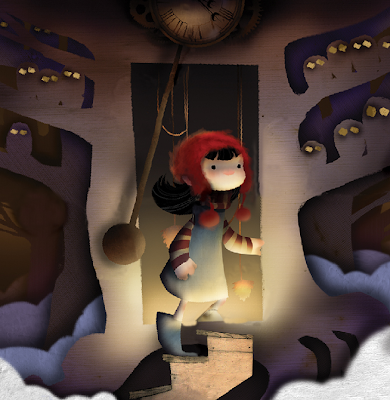 It looks like Lucidity is just about ready to be officially announced by LucasArts. According to an August 17th post on the LucasArts twitter page, Gametrailers will release an interview with LucasArts president Darrell Rodriguez, where he will reveal a new LucasArts intellectual property on September 10. It certainly looks like Lucidity will be that new IP.

It's great to see LucasArts developing new titles with charming artwork again. My hopes for a LucasArts-developed adventure game are just a smidge higher now. LucasArts has officially gained itself back a fangirl. :)
Posted by Jennifer McMurray at 3:33 PM