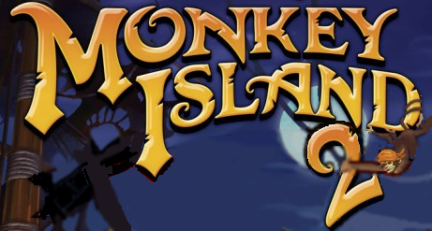 Monkey Island 2: LeChuck's Revenge was released just one year after the first game, The Secret of Monkey Island, was first released. Despite the short time between games, Monkey Island 2 was bigger in all respects. The game had more islands to visit, a larger more involving storyline, more characters, and a much larger soundtrack. The game was also the first LucasArts adventure game to use iMuse, a technology that allowed music to be changed on the fly within the game, allowing for smooth transitions between music and for several variations of the same song to be played (sometimes in the same scene). Unlike The Secret of Monkey Island, Monkey Island 2 remained virtually the same across all platforms on which it was released, up until this year's Special Edition which brought new art, music recorded from live instruments, and voice acting, along with jokes replaced due to copyright concerns.

Monkey Island 2 is bigger than The Secret of Monkey Island in every area.  It has a much more involving story, more music, more locations, more characters, and more islands to visit.  The tone of the game is darker than the first, and that change in tone is noticible in the music.  The theme is moodier than the first, although it retains the Carribean-inspired charm.  The Special Edition lacks the original intro when playing the game with new graphics and music, although the original intro can be seen in it's entirety when playing in classic mode (available on PC by pressing F10).  The Monkey Island 2 theme can be heard in the main menu in the Special Edition.  This game also ushered in a new technology called iMuse, which allowed the game to change the tempo of music, change melodies, or make smooth transitions on the fly.  Like with all of the early LucasArts titles, the game was designed with the Roland MT32 MIDI device in mind, but the game never needed one as it had Adlib sound as well.  The Special Edition doesn't have iMuse, as it uses digital music tracks rather than MIDI, but it emulates iMuse fairly well.  The transitions don't sound exactly the same, but they are fairly close in most areas.  I enjoyed Jesse Harlin's live orchestral renditions of Michael Land's Monkey Island 2 songs, so the non-perfect transitions were a non-issue for me since the music sounded so much nicer than I was used to with Adlib sounds all these years since I never owned a Roland MT-32.  The music in the classic mode in the Special Edition sound a bit off at times, but it's nothing too bad.

The voice acting in the Special Edition is once again wonderful.  This time the voice acting is also available in the classic mode, which is a nice bonus.  The Curse of Monkey Island cast of Guybrush, Elaine, Stan, and Wally (who debuted in Monkey Island 2) are great, and the new side characters are voiced well.  I didn't like Largo's voice at first, but it grew on me quite quickly.  He's voiced as a typical thug, and although he didn't sound how I imagined him, the voice fit the character.  The only voice I didn't like was Guybrush's mother.  I don't care for forced sounding voices, and hers was definitely forced.  I think they were going for a condescending tone, but they ended up with a voice that was more grating to me than the Soda Poppers from Telltale's Sam & Max series.  Thankfully she's not in the game long, and her role isn't long in the parts where she is in the game, so it's not too big of a deal.

The shortcomings of The Secret of Monkey Island were rectified in the sequel.  The game is larger, but it's also a lot less sparse, with lots of places to go on each island.  This makes the acts evenly paced, and the middle act doesn't feel like it drags on like it did once you reached Monkey Island in the original.  However, this game has a couple nuances of it's own.  The first game had puzzles with a pretty straight-forward logic, but this game pads the difficulty with a few odd puzzles.  One puzzle in particular is nonsensical if you aren't well-versed in American English.  The original game had a selectable difficulty with a easy mode and a hard mode, which isn't present in the CD version or the Special edition.  You can play the easy mode in the CD version of Monkey Island 2 in ScummVM, or in the Special Edition with a patch from LogicDeluxe on the Mixnmojo forums.  The Special Edition does come with a hint system, which would really come in handy on some of the more dubious puzzles in the game.

The control system in the Special Edition is much better than that of the Special Edition of the first game.  The verb bar and inventory are still hidden, but this time objects can be clicked on, and an icon of three or four choices of verbs can be chosen.  It is kind of like the verb coin in The Curse of Monkey Island, but it's not quite as simple to use as that.  The shortcut keys from the first Special Edition can be used here as well, and since I became so used to them last time, this method was my preferred method of playing the game.  In the classic edition, just like last time, the full verb and inventory system of control is still used.  A few jokes have been changed in the game due to copyright issues, but the designers chose appropriate alternatives which are just as funny, or sometimes funnier than the original.  A few new jokes have been added into the art, just like last time, so the game is a treat for those who like easter eggs.

This game is just as deserving as its status as a classic as the original.  This game took what was great about the original and made it better. The story is bigger, there is a lot more music so the game never is quiet (and the iMuse system helps make the atmosphere feel alive through the music), and the personality of the characters are extended upon in believable ways. This game fixes some missteps from the first game as far as pacing goes, but some of the puzzles use a bit off odd logic.  I'd recommend the Special Edition purely for the voices alone.  Like The Secret of Monkey Island, the voices really add a dimension to the game that wasn't there before.  The performances of Dominic Armato as Guybrush and Earl Boen as LeChuck in the more intense moments of the game really add to the feeling of tension, much moreso than was possible with pure text.