The best news is that the Pinkerton Road Kickstarter will be producing two new adventures, rather than just one. The second game is only called Mystery Game X at this point, but it will be included as part of this kickstarter.

We know that the first game selected from a list of proposal by Kickstarter backers will be Moebius. The story of the game is described on the kickstarter as:

Malachi Rector is an antiquities dealer who hunts down artifacts all over the world. After his upscale Manhattan store is destroyed in a fire, he's hired by billionaire Amble Dexter to investigate a series of events and document them in his meticulous way.

The first event is the death of a young woman in Venice. She was found hanging from a bridge. As Rector investigates her life, compiling facts for his dossier, he realizes that the beautiful and talented young woman -- and the interrupted path of her life -- had great hidden significance. It appears that Amble Dexter and his associates are playing with the fabric of life in a way Rector never imagined was possible. Even he, Rector himself, is part of a larger pattern. He must figure out who is doing what, and whether their intentions are for good or ill, before he can decide if he will play his pre-scripted role -- or try to change the outcome. This is a metaphysical thriller ala Dante’s Equation and Gabriel Knight.

The backer bonuses have been increased as well. The $200 tier still gets a big box release for the games made by Pinkerton Road, but the big box of Moebius has also been added to the $100 tier. In addition, the $100 tier also will get a high-res digital art print of this year's art, signed by Jane and Robert.

There is also new concept art for Moebius, which looks pretty impressive: 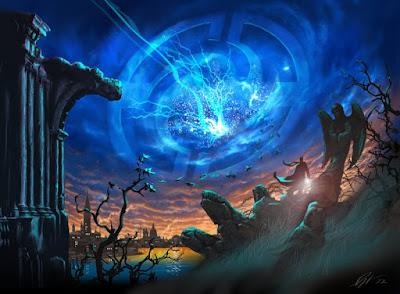 If you are interested in these games, there's still eight days left to back Jane Jensen's Moebius and Pinkerton Road Studio Kickstarter
Posted by Jennifer McMurray at 9:24 AM