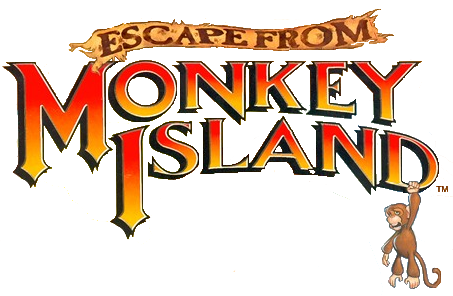 The last original Monkey Island game that was developed by LucasArts broke from tradition in many ways.  Some of these changes worked, while others did not, making this chapter the weakest of the lot.

This game takes place several months after the end of The Curse of Monkey Island, as Elaine and Guybrush come back to Melee Island to find that Elaine has been declared dead due to her being gone for so long, and an election is being held to elect a new governor.  The two must work to get her deemed legally alive again and to have her win the election.  Of course, this means Elaine works the political angle, while Guybrush sails around the Caribbean to find those who can set things right.  In the midst of it all, Guybrush meets a greedy Australian land developer who wants to replace the pirate atmosphere of the Caribbean with family friendly tourist locations.

The Monkey Island series has always had connections with Disneyland since the first game, but here those connections are more obvious than ever before.  The game was made at a time when Disney was changing all of their theme parks so that businesses could plant themselves in the park without having to keep with the theme of the park in which they are located.  It is an obvious satire of the situation, which goes beyond the other games which have been more subtle in their Disneyland homages.

In fact, this game is a lot less subtle in just about every area than the other games in the series.  There are a lot more references to modern popular culture, and the humor is much more low brow here than previous games.  Guybrush is also portrayed as an even bigger loser than usual, with a lot of the humor being directed towards him.  It is a funny game, though, if you don't mind that style of humor.

The art style tries to replicate The Curse of Monkey Island in a three dimensional environment, and doesn't do too good of a job of it.  The technology just wasn't ready for that kind of art in 2000.  While the pre-rendered backgrounds do look quite nice in places, the character models are jagged and in the realm of uncanny valley with their expressionless eyes.  It runs on an updated version of the engine that ran Grim Fandango.  While that game worked well within the limitations of the time, making it's characters papier-mâché skeletons, Escape from Monkey Island tries to go beyond the limitations and doesn't really succeed.  What looked so nice with skeletal characters, really doesn't work as well with humans.

The game does have quite a few good sides to it, though.  The characters are all interesting, and are voiced excellently, from the returning characters to the new.  One minor change from the last game is that Elaine has received a new voice actress with an American accent.  It's an abrupt change when you're used to hearing Alexandra Boyd, but Charity James does a fine job with the character.  This game also introduces a main primary villain, in the Australian Ozzie Mandrill.  This is one change that did well for the series.  LeChuck is a fun villain, but it's always nice to see something new.  Ozzie was portrayed quite well, with the right amount of arrogance and pomposity, so he fit in this role perfectly.  The game's music, once again performed by Michael Land, is one of the game's high points.  The Monkey Island score has always been excellent, and it doesn't disappoint here.

Most of the game's puzzles are quite good as well.  They are firmly in the classic mold, with the difficulty ramping up as the game goes on.  They are all pretty well done though, and are all able to be worked out if you think within the logic of the game's world.  The one thing that doesn't work well, however is Monkey Kombat.  This is a play on the insult sword-fighting from the first and third games.  Here, however, instead of learning insults, Guybrush has to learn monkey noises.  Then he has to learn which monkey noises to say to win in duels against other monkey noises.  The only way to do this is to tediously go through countless pointless monkey kombat matches and write the combinations down on a chart.  It's a silly idea that isn't executed well at all.  It drags the last part of the game down, and makes completing the game feel like a chore.

Escape from Monkey Island is the one game in the series that departed from the others the most.  Unfortunately, it didn't always do so in a good way.  The story is fine, the characters are interesting, the puzzles are good, and the voices and music are fantastic.  However, it went for a three dimensional art style that tried to mimic The Curse of Monkey Island, which didn't work out so well as the technology to do so wasn't available in 2000.  The biggest problem with the game, and the one that hurts it the most, is the tedious Monkey Kombat portions.  They aren't fun at all, and they make it hard to want to keep playing to finish the last part of the game.  It's a shame, as I liked most of the game.  If there ever is a remake that improves the character models and simplifies the Monkey Kombat portions, I might recommend this game higher.  As it stands, this game is probably only going to be fun to the very patient and those who are huge Monkey Island fans who wish to experience the complete story.