Tales from the Borderlands Episode 5 Review 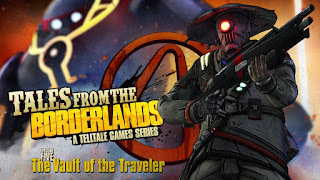 After the surprise emotional roller coaster of episode 4, the finale kicks the adrenaline up to eleven.

This episode finds Rhys and Fiona escape the clutches of their captors, and it also sees the reveal of the stranger. This final reveal is a bit surprising, but it makes sense as the final big bad of the game is revealed. The heroes accidentally unleashed a powerful weapon, and, with the game caught up with itself into the present, they will have to team up with characters that they have already met up with, and some surprise guests to defeat it.

The choice of characters to bring into this final battle ultimately is driven both by your choices in previous episodes, as well as how much loot you had collected throughout the entire adventure. These characters range from vault collectors to unscrupulous Pandora citizens, most of whom are new to this game, however, there are two fan-favorites from the Borderlands franchise as a whole as well. Each of these characters is voiced excellently and are all funny and entertaining in their own right. This final battle is performed entirely in quick time event button presses, but it’s epic enough that it is a lot of fun and doesn’t feel like a chore. In fact. it’s worth playing through more than once to see all of the optional characters.

The final episode wraps up the story in an epic matter, with a fantastic final battle, and a fantastic story that wraps things up with just enough threads left open with which Borderlands 3 can pick up and run.