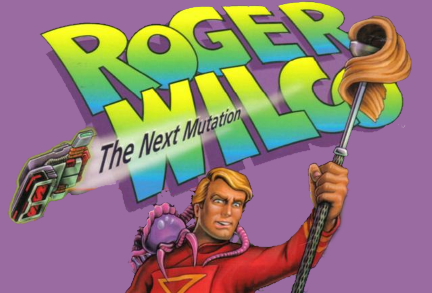 Space Quest V was a departure from the previous games in many ways.  It was the first game in the series to not be helmed by both creators of the franchise, It was also the first to be developed by a developer other than Sierra, as it was developed by Sierra's Dynamix division.  It also found Roger in a position of power for the first time.  However, despite these changes, or possibly because of them, Space Quest V is one of the best games in the series.

Roger Wilco cheats on his test at Starcon Academy, and finds himself as captain of the SCS Eureka, a ship designed to vacuum space debris. He's technically still a janitor, but now finds that he's no longer the lowest member of his assigned spacecraft. For the first time, he has power over the members of his crew, even if they aren't particularly enthralled to be assigned to a garbage scow. His simple mission soon gets complicated, as he finds himself in the middle of a toxic conspiracy.

This game doesn't have voice acting, despite the fact that there is voice acting in the two games that bookmark it.  Thankfully, the writing more than makes up for it, as the humor in this game is top notch.  The previous game had a lot of funny moments, but this game breaks out all the puns and references to Star Trek, and other science fiction juggernauts that it can. Thankfully, the humor isn't overbearing on the main plot, as it is rock solid here.  Roger really shines in a leadership position, and the villain that he faces is excellent, and quite multifaceted.

The art style is fantastic for it's time, which was always one of the strong points of Sierra, and their associated divisions.  The backgrounds have a lot of detail, and the animation of the sprites are great. The puzzles in this game are quite difficult, as is usual in Sierra's games.  Thankfully, there aren't any puzzles that don't make sense logically.  Some stretch real world logic a bit, but within the context of the game's science fiction world, they fit in fine.  This game is definitely one of those that fit in the Sierra mantra of save early, save often.  It is very possible to die, especially in confrontations with enemies, so it would be wise to save whenever you make progress.  It's also possible to get in a dead end, and some sequences require precise timing, which can be quite infuriating at times. This player punishing style of Sierra's games didn't age as well as their contemporaries at LucasArts, but if you're willing to play through despite the frustration, the underlying story is worth experiencing.